“I hope you brought something warm,” said Eileen Rockefeller after we had sat down for an interview for a Capital series about the world’s most famous families in business history. A chilly November wind was blowing around her white farm house, but for John D. Rockefeller’s great granddaughter, the weather is never an excuse not to take the horses for a ride. For visitors who come unprepared, she can provide spare coats, hats and gloves.

Two black Morgan horses were waiting in front of the carriage when we stepped outside for the ride across Ms. Rockefeller’s farm in Vermont. She had seemed rather casual just a few moments ago, wearing an orange tunic over black leggings. But perched atop the carriage wearing fur coat and hat and wielding the bridles, she had a royal air around her – which Jason Andrew managed to capture in his wonderful photographs.

Eileen Rockefeller is the second gentlewoman farmer I interviewed this year. What draws these wealthy famous ladies to the rural life? As for the former Cisco founder Sandy Lerner (see my previous post), the rural life is partially an escape for the Rockefeller heir.

It took her a long time to accept the celebrity status connected to her name. “Being a Rockefeller, Becoming Myself,” is the title of her autobiography,  in which she describes growing up as the youngest child of David Rockefeller. At 99, the former chairman of the Chase Manhattan Bank is the last surviving grandchild of the legendary John D. Rockefeller – founder of Standard Oil and America’s first billionaire.

“Senior,” as his descendants like to call him, left a legacy full of controversy and contradictions. In his lifetime, he was admired and reviled as a capitalist who grew his business empire into one of the world’s first truly global corporations and into a monopoly that was eventually carved up by the Supreme Court.

But he was also a deeply religious man who spent the last years of his life giving away big chunks of his fortune. His son, John D. Rockefeller junior, devoted his entire life to distributing his father’s wealth. Many of America’s finest museums, hospitals and national parks would not exist without his generosity and interest in art, science and preservation.

One could say that the Rockefellers invented modern philanthropy. “It is easy to give away money, but it is hard to give it well,” said John D. junior. For Eileen and many of her siblings and cousins, giving wisely today means fighting what made their famous ancestor so rich. Last year, the Rockefeller Brothers Fund joined other non-profit organizations by selling the big majority of its fossil fuel investments.

With her husband Paul Growald, Eileen set up the Growald Family Fund that focuses on fighting new coal plants from being built. And if she could stop the fracking industry or the construction of the Keystone XL pipeline, she would certainly do it. “I think for many Americans oil means self-sufficiency and independence. But this way of thinking is already a dinosaur,” she told me. 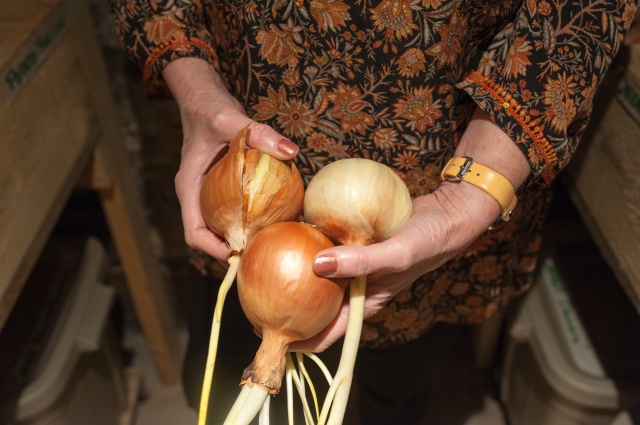 Her farm house is heated by several rows of solar panels right behind the garden that provides vegetables and herbs for the family dinners.Visitors get to taste home-made honey and cheese from her farm. The cellar is filled with glasses of canned tomatoes and crates with onions and potatoes. Eileen Rockefeller labels her produce as meticulously as her great-grandfather would have listed his expenses in his famous ledgers.

She likes to think that if “Senior” were alive today, he would agree that the age of fossil fuels has to end if the planet is to be saved. For this Rockefeller, her onions and potatoes are all she ever wants to pull out of this earth.

This entry was posted in Americana and tagged Capital, Energy, Environment, Women. Bookmark the permalink.