My Valentine’s Day gift, a lovely wisdom teeth removal surgery. It all went well apart from a headache the next day. But when it comes to medical treatment in the U.S. the real headache starts weeks later – when the bills start arriving and when you start to haggle with your insurance. In the distorted economy of America’s health care system, you are forced to buy services before learning the cost.

I planned to write about America’s dysfunctional health care ‘market’ in my blog for a while – but now Time magazine beat me to it. This week’s cover story by Steven Brill is the most in-depth account I have ever read about what is wrong with this system: out-of-control costs and intransparent billing practices that have nothing to do with free market price setting. President Obama’s health care reform might be a first step, but it does not even begin to address the real issues.

Like most of my fellow foreign reporters in DC, I have written many articles about the struggle to reform the U.S. health care system without any first-hand knowledge of what Americans are up against. I had a private insurance for Germans working abroad. The monthly rates were not cheap, but the procedure was straightforward: I paid all my bills up to a deductible of $2,000. Once that was reached (which happens fast in the U.S.) the insurance stepped in and paid 100 percent of everything above that limit.

The fun began when I joined my husband’s American insurance last summer. He works for the government, so I was confident I’d be receiving the best America’s health care system offers. However, after my first major procedure, I don’t want to know what having a bad health insurance would be like. While I do now pay lower monthly rates, I have no control over health care expenses. Having grown up in the regulated German health care market, I now get lost in a jungle of billing codes, copayments, allowances and deductibles. 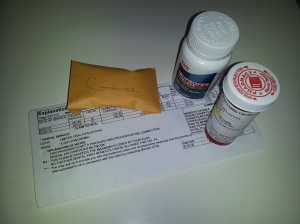 To my surprise, most Americans seem to be lost as well – but put up with it with incredible patience. “Just ignore it”, my husband and friends tell me when I find another unintelligible bill in the mail. Sure enough, in most cases, these letters are just copies of correspondence between the doctors and the insurance. In the end, the difference between what was charged and what was paid (“funny money”) magically disappears.

Except when it doesn’t. As was the case for another foreign friend who gave birth in the U.S. and had stellar health insurance. It didn’t matter – she ended up having to pay more than $2,000 out of pocket. Her European employer picked up the bill, since nowhere (other than in the U.S.) would anyone with health insurance have to pay extra for something as basic as giving birth.

Co-payments would not even be such a problem – if the bills were less high. Paying for a whole procedure in Germany out of pocket can be cheaper than just the co-payments the U.S. A general blood check-up in Germany costs 50 Euros – in the U.S. you fork over at least $800 for the same service. Having my wisdom teeth removed in Berlin would have cost me 400 Euros if I had paid all by myself. In Washington, the price tag was $1700 of which I had to pay $450 even though I had insurance. Time magazine has graph that shows the gap between prices for basic medical procedures in the U.S. and other OECD countries.

Just the co-payments can ruin you. An American friend had lymphoma and could not work for a year due to several rounds of chemotherapy. He is back to work now but he will never be able to pay off his medical bills. His hospital copayments were 20 percent – with overall costs of one million dollars, that is hardly a consolation. As the Time article points out, most private bankruptcies in the U.S. are related to medical debt.

While the article focuses on revealing the most shocking practices of the nation’s leading hospitals (which bill you for each aspirin and for each warm blanket they provide), some doctors are rather ruthless, too. Dentists for example, take X-rays at every visit (and most Americans see their dentist twice a year). When I once refused to take a panorama X-ray (my teeth are healthy and I don’t want to be exposed to radiation without a reason), the dentist office’s Chief Financial Officer (!) left voice messages for several weeks to ask me to come back for this expensive procedure.

If you are looking at the economics of all this, you would also have to look the time patients waste on the phone with the insurance or the billing department of their doctor’s office. I have already made countless phone calls to find out why I was getting a bill when my insurance should be paying. I usually spend 20 minutes in some hotline before I get hold of someone who looks at my file and says: “Oops, sorry, we will re-submit this.” Or: “This was not processed because you and your husband have different last names.”

The insurance agent was not so sure, so I asked the dentist’s office to do the research for me. They got back to me with the information that I would have to pay $800. When I asked them to verify this once more the price suddenly fell to $450. But of course, I was informed, this was no guarantee. “We will let you know if there are additional charges.” I have no doubt that I will find out soon enough.

This entry was posted in Americana and tagged Health. Bookmark the permalink.