Sperm is a simple commodity compared to the much more delicate product that is traded on the second floor of the building that houses the Fairfax Cryobank. Oil paintings with flower motifs decorate the salmon colored walls of the Institute for IVF & Genetics. The donors and recipients of egg cells recover from their procedures in waiting rooms with comfortable wicker chairs and magazine selections displayed on white dressers.

This is where our Capital story got exotic for readers in Germany, where commercial egg donations are prohibited. The German doctors my colleague Marina Zapf spoke with expressed their frustration at this limitation. The Fairfax clinic staff told me how they once treated a German patient who lined up her medical appointments with business trips to the U.S. The egg recipient had to take several trips, because for German doctors it would be illegal to even perform the hormone treatments leading up to the transfer of an oozyte.

The situation is a lot easier for British women many of whom receive donor eggs in the United States. The procedure is legal in the UK, but the donor databases offer fewer choices. In the UK, just like in Spain, the other big European market for egg donations, the amount an egg donor can earn is legally limited to a few hundred Pounds or Euros – whereas in the unregulated U.S. market, a donor can make up to $10,000. 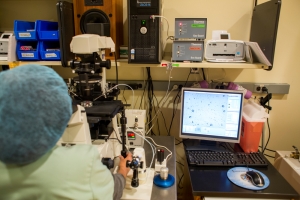 Donating eggs is more controversial than donating sperm. “The main difference is what the donor has to go through”, said Laurence Udoff, one of the physicians at the Fairfax clinic. Donors have to undergo hormone treatment to stimulate their ovaries to produce more than one egg in one cycle.

Critics warn of possible health risks to the donor, but Dr. Udoff claimed that the procedure was as safe as any hormone treatment for a normal IVF cycle. He also pointed out the rigorous health screening the roughly 100 egg donors the clinic works with had to pass.

The clinic in Fairfax has decades of experience with the procedure, but only a relatively recent breakthrough allowed the business to thrive as it is thriving today. It is the same technology – oozyte cryoconservation –  that made it possible for women to freeze their own egg cells for a later pregnancy.

Listen to Laurence Udoff explain the progress in recent years and why he can now offer fresh and frozen eggs.

This entry was posted in Transatlantic and tagged Capital, Family, Health, Women. Bookmark the permalink.